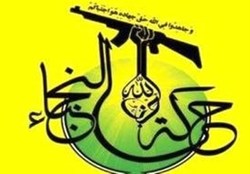 Deputy Secretary-General of al-Nujaba Movement (one of Iraqi popular forces) Nasr al-Shamri referred to the US attempts to find a pretext to stir insecurity in Iraq and the region, and underlined preparedness to give a crushing response to any hostile move.

RNA - Al-Nujaba is ready to respond to any US hostile measure, al-Shamri told the Arabic-language Baghdad al-Youm on Sunday.

"Our battle against the US will continue until the end of their occupation and annihilation of the usurper regime (Israel) in the region," he added.

Also, last Wednesday, Asa'eb al-Haq Movement affiliated to the Iraqi popular forces of Hashd al-Shaabi reiterated its support for Iran and the necessity for the American forces to leave Iraq.

Senior member of the politburo of Asa'eb al-Haq Laith al-Ozari underscored the Movement's support for Iran against the US in return for Tehran's assistance to the Iraqi nation in war against the terrorist groups.

He also voiced opposition to the deployment of foreign forces in Iraq as "occupation", cautioning that all citizens are entitled to the right to fight these foreign occupiers.

Al-Ozari said that the political fractions in Iraq would not allow their country's territory be used as a platform for attacks on the neighboring states.