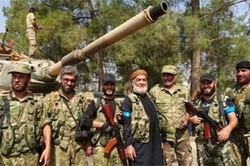 The Turkish Army dispatched thousands of the Free Syrian Army (FSA) militants from Northern Aleppo to Hama to back up Tahrir al-Sham al-Hay'at (the Levant Liberation Board or the Al-Nusra Front).

RNA - "The Turkish Army has sent the terrorists under its umbrella of coalition to Northern Hama from Afrin and Izaz to support Tahrir al-Sham terrorists in its battle against the Syrian Army," the Kurdish-language Hawar News website reported.

The Turkish Army has dispatched thousands of the FSA militants from Northern Aleppo to Hama to back up Tahrir al-Sham al-Hay'at, Kurdish-language media outlets said.

Kurdish-language Hawar News website reported that the Turkish Army has sent the terrorists under its umbrella of coalition to Northern Hama from Afrin and Izaz to support Tahrir al-Sham terrorists in its battle against the Syrian Army.

It noted that a military convoy comprising hundreds of Ankara-backed militants together with weapons and military equipment have been sent to Northern Hama via Qazawiyeh crossing in Southern Afrin.

Meantime, the sources close to the terrorist groups reiterated that hundreds of FSA terrorists have moved towards Idlib to reach battlefronts in Hama. The FSA terrorists moved from Izaz, Jarablus, Al-Bab and Afrin in Northern and Northeastern Aleppo.

Meantime, the Turkish Army sent several of its troops and military equipment, including its elite forces, to the city of Qiriq Khan in Hatay region in Southern Turkey behind borders with Syria.

The Damascus Army's air defense systems shot down more Israeli drones before they could arrive in Quneitra, media reports said.

According to Fars News Agancy, the Arabic-language version of Sputnik news agency, meantime, pointed to the possibility that the drones have been spy aircraft and the Syrian Army's air defense had confronted two of them that had violated the Syrian airspace in Jabal al-Sheikh in Western Occupied Golan and Khan Arnabeh in Quneitra.

The Kurdish forces backed by the US-led coalition have prepared to launch military offensive against the Syrian Army and resistance forces in Deir Ezzur Province, media reports said.

The Turkish-language Anatoly news agency quoted local sources as saying that After taking control of Eastern Euphrates region, the Kurdish fighters are preparing to launch an attack on Damascus-backed forces in Eastern Euphrates in Deir Ezzur.

It noted that the US-led coalition forces are training the Kurdish fighters Ain Issa bases in Raqqa province and al-Amr oil region in Eastern Deir Ezzur, adding that the trainings include passing through mobile bridges and rivers.

The US-led coalition forces and Kurdish fighters are looking for winning the support of regional tribes for launching the attack after residents of the region called for holding massive protests in Eastern Euphrates and called for expulsion of US-backed Kurdish fighters.