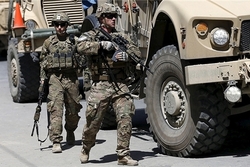 For a long time, the United States and its partners have been downplaying and ignoring the role their deadly weapons have played in committing war crimes and crimes against humanity in Yemen.

RNA - Now, some are conceding that their weapons are indeed the reason why many civilians have been killed and continue to get killed in that unfortunate country.

Strange enough, when US political leaders urged the Trump administration to either reduce or cut off arms supplies to Saudi Arabia - largely as a punishment for its indiscriminate bombings of civilians in the four-year old military conflict - President Donald Trump provided a predictable response: “If we don’t sell arms to Saudi Arabia, the Chinese and the Russians will.”

Perhaps in theory it’s plausible, but in practice it’s a lie primarily because switching weapons systems from Western to Chinese and Russian arms in the middle of an ongoing war could be a long drawn out process. It involves maintenance, servicing, training, military advice and uninterrupted supplies of spares – something the US and company have been providing to the Saudis from day one of the conflict, even refueling their warplanes midair and providing targeting intelligence.

More so, UN experts and rights groups point out that Saudi Arabia would find it very hard to maintain the US and UK weapons its armed forces largely rely on without the support of the large numbers of US and UK service personnel in the war right now. “The Saudi military might be able to keep the weapons going for a while in Yemen, but presumably at a much lower operational level.”

Which is to say it will not only be very costly for Saudi Arabia to replace the expensive existing equipment, it also means that non-western weapons will not be as high quality as what Saudis now receive from the US and Western Europe.

As is often the case, these are the same weapons that are being used to commit war crimes in Yemen - including the intentional bombings of funerals, hospitals, weddings, factories and other civilian infrastructure - triggering condemnation from the United Nations and human rights groups who also accuse the Western governments of being complicit in Saudi war crimes.

For instance, in its World Report 2017, Human Rights Watch said the Saudi Arabia-led coalition has carried out military operations, supported by the United States and United Kingdom, against Ansarullah forces and forces loyal to former President Ali Abdullah Saleh since March 2015.

According to Human Rights Watch, in between, “the coalition has unlawfully attacked homes, markets, hospitals, schools, civilian businesses, and mosques. None of the forces in Yemen’s conflict seem to fear being held to account for violating the laws of war. UN members need to press the parties to end the slaughter and the suffering of civilians.”

Besides Saudi Arabia, the coalition includes the United Arab Emirates, Bahrain, Kuwait, Egypt, Jordan, Morocco, Senegal and Sudan. In a report released last February, Amnesty International also said the weapons for the coalition, primarily to Saudi Arabia and UAE, have come mostly from Europe and the US. This also makes these regional countries complicit in Saudi war crimes.

The time is now for all these countries to stop supplying arms to the Saudi-led coalition in Yemen until there is no longer a substantial risk that such equipment would be used to commit or facilitate serious violations of international humanitarian and human rights law.

According to Fars News Agancy, at any rate, the results of a study commissioned by the UN Development Program, released last week, confirm the worst: The ongoing conflict has reversed Yemen’s human development by 21 years. The study warns of exponentially growing impacts of conflict on human development. It projects that if the war ends in 2022, development gains will have been set back by 26 years. If it continues through 2030, that setback will increase to four decades.

It means what it means. The long-term impacts of the illegal war are vast and place it among the most destructive conflicts since the end of the Cold War. Further deterioration of the situation through Western arms transfers will add significantly to prolonged human suffering, retard human development in Yemen and further deteriorate regional stability.

Here, human development has not just been interrupted. It has been deliberately reversed. Even if there were to be peace tomorrow morning, it could take decades for the poorest country in the Arab world to return to pre-conflict levels of development. This is a big loss for the people of Yemen.