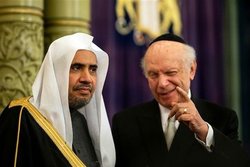 An Israeli delegation is going to pay an official visit to Saudi Arabia next year, amid the oil-rich kingdom’s warming ties with the Tel Aviv regime following years of clandestine contacts.

RNA - “For the first time, a Jewish delegation will visit Saudi Arabia in response to the Muslim World League invitation, said the Saudi secretary general of the League, Sheikh Muhammad Bin Abdul Karim Issa, who declared the visit will take place in January 2020,” Israel’s Ministry of Foreign Affairs said in a post published on its Arabic-language Twitter page.

Akhbar noted that Abbas had turned down the offer, saying supporting the deal would be “the end of his political life.”

Citing leaked diplomatic reports based on conversations between the two Arab politicians, the paper noted that the reports -- written by the Jordanian envoy to Ramallah, Khaled al-Shawabkeh -- were based on briefings with a number of Palestinian officials.

The Palestinian Authority chief said political realities prevented him from accepting the so-called peace plan, emphasizing that he could not make concessions regarding Israeli settlements, the “two-state solution” and Jerusalem al-Quds.

According to Press TV, Abbas also underscored that the Americans would not provide any written proposals, but would adopt a tactic similar to the 1917 Balfour Declaration that led to the Israeli occupation of Palestinian territories.