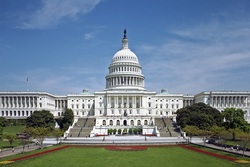 Two Democrats in the US House of Representatives have joined a coalition of liberal advocacy groups to deliver a petition with over 10 million signatures calling on Congress to impeach President Donald Trump.

RNA - Representatives Al Green (D-Texas) and Rashida Tlaib (D-Mich.) joined with groups including Need to Impeach, Free Speech For People, CREDO, MoveOn, Democracy for America, Women's March, Courage Campaign and By the People in a rally on Thursday in front of Capitol Hill in Washington, DC, to highlight the petition.

"I always tell people: 'This is your House, you tell us what to do.' This is us telling this House what to do," Tlaib said at the rally.

Tlaib introduced a resolution in late March that urges on the Judiciary Committee to examine whether the House should impeach Trump. Several House Democrats have signed on the resolution after the release of a partially redacted version of Special Counsel Robert Mueller's report.

Tlaib on her first day as a member of Congress earlier this year told a crowd "We're going to impeach the mother***r," in reference to Trump.

Congressional Democrats have taken a legal step to see all of Mueller’s evidence from his inquiry into alleged Russian interference in the 2016 election.

The redacted edition of the much-anticipated 400-page investigation, covering Russia's meddling in the 2016 presidential election, as well as Trump and his team’s wrongdoings and possible presidential obstruction of justice, was released in Mueller's report last month.

Congressman Green dismissed the argument from House Democratic leaders who have questioned the effectiveness of the House impeaching the president when the Republican-controlled Senate would protect Trump.

"We must impeach. Let the Senate do what they may. We have to do what we must," Green said.

"Each day that we wait is a day we waited too long. I say we should start impeachment immediately, if not sooner," he added.

The rally came after the House Judiciary Committee voted on Wednesday to hold Attorney General William Barr in contempt of Congress after his refusal to provide an uncensored copy of Mueller’s report on alleged ties between Trump and Russia.

The 24-16 vote along the party lines came after the highest US law enforcement official defied a subpoena to hand over the report and underlying evidence, in an apparent attempt to withhold damaging information that could be used against the president.

The Democratic-led committee’s vote means that the full House of Representatives should now vote on holding Barr in contempt.

Democratic leaders have said it's too soon to pursue impeachment and want to move forward with their investigations.

"The president is almost self-impeaching because he is, every day, demonstrating more obstruction of justice and disrespect for Congress's legitimate role to subpoena," Speaker Nancy Pelosi (D-Calif.) said at a press conference on Thursday. "This is very methodical, it's very Constitution based, it's very law based, it's very factually based. It's not about pressure, it's about patriotism."

"Sometimes people act as though it's impeach or nothing. No, it's not that. It's a path that is producing results and gathering information, and some of that information is that this administration wants to have a constitutional crisis because they do not respect the oath of office that they take to protect and defend the Constitution of the United States," Pelosi said.