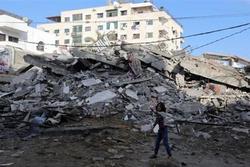 Reports suggest a ceasefire agreement has been reached between Israel and Gaza to end a surge of violence that led to the deaths of dozens of Palestinians and Israelis over the past few days.

RNA - Gaza officials say Egypt and Qatar helped mediate an end to days of attacks between Gaza and Israel. There is no confirmation from the Israeli side. An Islamic Jihad official, on condition of anonymity, said the truce agreement was based on Israel easing its blockade of the Gaza Strip. Among the steps, he said, are the easing of limits on the fishing zone off the coast of Gaza and improvements in Gaza's electricity and fuel situation.

Around two million Palestinians live in Gaza, the economy of which has suffered years of Israeli and Egyptian blockades as well as recent foreign aid cuts and sanctions by the United States and allies. Now Washington claims an elusive "deal" is supposedly being concocted.

We have been awaiting the unveiling of this “deal” for almost two years now. During this period, while the “deal” was supposedly being concocted, the Trump administration and the Netanyahu regime have been quite busy taking steps that make clear their intentions toward the Palestinians.

Trump has recognized Jerusalem Al-Quds as the capital of Israel. And by closing the US Consulate and denying US assistance to Palestinian institutions in the East Al-Quds, he has placed this captive Palestinian community wholly under Israeli control and occupation. Similarly, the Trump administration has attempted to take the issue of the Palestinian refugees off the table at the United Nations by suspending all aid and making clear that they do not consider the descendants of those who were forced into exile in 1948 to be refugees.

At the same time, by their silence and financial aid, the Trump Administration has accepted Israeli bombings of Gaza and land grabs that have undermined the future of Palestinian lands and rights. Illegal settlements have expanded, illegal outposts have been legitimated, and illegal Israeli demolitions of Palestinian homes and exploitation of Palestinian resources and lands have accelerated at an alarming rate.

Add to this the recent Israeli violence that killed scores of civilians, including women and children, in the besieged city of Gaza, and you will realize that in this criminal campaign Washington and Tel Aviv are indeed one and the same.

Indeed, the US government has Palestinian blood on its hands. It is complicit in Israeli crimes against humanity and that says why it takes action to protect Israel from the International Criminal Court at any given opportunity. At the same time, the US government has made efforts to criminalize support for anti-Israel boycotts (BDS) around the globe – all of which have contributed to furthering Palestinian powerlessness and Israel’s sense of impunity.

According to Fars News Agancy, with this in mind, Israeli violence against the besieged people of Gaza is far from over. Even if there is a “deal” by Washington or a ceasefire agreement, it won’t last. The only way to end a future violence is to lift the illegal blockade and end the US-backed occupation of Palestinians lands.

Washington and company should also allow the creation of true Palestinian sovereignty and control over their own land and resources, allow Palestinians the opportunity to freely and independently conduct commerce with the outside world, recognize the rights of Palestinian refugees to return and end their recognition of the Israeli occupation of Jerusalem Al-Quds. And that would be just the beginning. Failure to do so would only ensure greater violence along the Gaza border and surrounding areas which will eventually spread to the West Bank.

Which is to say the status quo brings only continued pain, suffering and war. The US non-stop efforts to make its "Deal of the Century" that envisions a seizure of almost the entire West Bank among others is, in fact, a preemptive move to avoid the spread of armed resistance to the Palestinian territories in the East. Ultimately, the Israeli-Palestinian conflict must be resolved through a referendum on the fate of the occupied Palestinian territories, Gaza and the West Bank by the indigenous population of Palestine and their descendants.