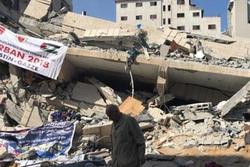 The Palestinian health ministry says the death toll from Israeli strikes on the Gaza Strip rose to 27 as a couple was uncovered from the rubble.

RNA - The Gaza health ministry announced the news in a statement, saying that the bodies of two people “were found on Monday morning in the northern Gaza Strip.”

It also identified them as Talal Abu al-Jidian, 48, and her wife as Raghda Mohammed Abu al-Jidian, 40, adding that the corpses had been found under the rubble of a building that had been completely destroyed in the fresh wave of Israeli aerial aggression on the impoverished enclave.

The couple had a 12-year-old son, Abdul Rahman al-Jidian, who also lost his life in the Israeli brutal airstrikes and his body was uncovered from the rubble several hours earlier.

On Thursday, Israeli warplanes conducted airstrikes against a number of purported Hamas positions in the northern part of the coastal strip in response to the alleged launch of incendiary balloons from the besieged enclave.

In response to the air raids, two rockets were reportedly fired from Gaza towards the southern parts of the Israeli-occupied territories. On Friday, Israeli fighter jets for a second time targeted some purported positions of Hamas in Gaza. The attack reportedly killed two members of Hamas' military wing, known as the Ezzedine al-Qassam Brigades.

On Saturday morning, around 90 retaliatory rockets were fired from Gaza into the occupied territories. A few hours later, Israeli warplanes conducted airstrikes on Gaza for a third time, which triggered dozens more rocket launches from Gaza.

The exchange of rockets and airstrikes continued on Sunday. The Israeli army said its warplanes targeted some 180 sites in the Gaza Strip during the past few days, adding that some 600 projectiles had been fired from Gaza in retaliation.

Tel Aviv also said that four Israeli settlers had been killed and at least 80 others wounded. The Hamas-run Gaza authorities, for their part, said that the Israeli fresh aggression killed 27 Palestinians and wounded more than 150 others in the attacks. Two pregnant Palestinian women and two infants were among the dead.

The two sides, however, reached a tentative truce, brokered by Egypt and the United Nations, and appeared to have taken hold on Monday morning, bringing to an end the worst cross-border violence between the Israeli regime and the besieged Gaza Strip since a 50-day war in 2014.