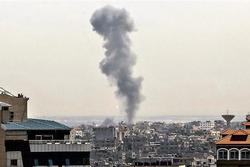 Gaza Ministry of Health announced that 25 Palestinian civilians have been killed and over 150 injured in the ongoing Israeli military aggression on the besieged area.

RNA - Israeli warplanes and gunboats on Sunday targeted several homes and sites in the Gaza Strip, while the Palestinian resistance fighters fired dozens of rockets toward Israeli settlements neighboring the enclave, Palinfo reported.

According to the Ministry of Health, Gaza victims included two pregnant women and three infants.

Earlier on Sunday, Israel's Prime Minister Benjamin Netanyahu instructed the Israeli occupation army to continue with massive strikes against the Palestinians in the Gaza Strip and ordered the forces to reinforce troops near Gaza border.

The government media office in Gaza announced that Israel has attacked at least 200 civilian facilities, including residential buildings, mosques, shops, and media offices.