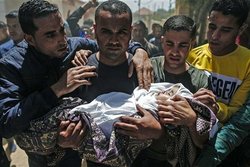 The 14-month old Palestinian child who was allegedly killed in an Israeli airstrike was laid to rest in Gaza City on Sunday, alongside her 37-year old pregnant aunt Salah Bat Abu Arar.

RNA - According to Gaza Health Ministry, Saba Mahmoud Hamdan Abu Arar was killed when a rocket hit eastern Gaza City, and died instantly. The woman, who was earlier reported incorrectly as her mother, died from severe injuries on Saturday evening.

In total, around 450 rockets were launched by Gaza militants towards Israeli territory since Friday, with Israeli forces carrying out airstrikes on numerous targets in Gaza Strip.

The conflict entered its second day on Sunday, with eight Palestinians and three Israelis killed since tensions escalated on the border.