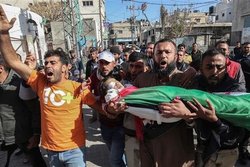 Palestinians in the Gaza Strip have held funerals for those killed by Israeli airstrikes, as the Israeli regime continues to pound the besieged enclave.

RNA - On Saturday, mourning inhabitants of Gaza held funeral ceremonies for two Palestinians who lost their lives in Israeli airstrikes conducted on Friday, when two Palestinian protesters were also killed near a fence, separating Gaza from the Israeli-occupied territories.

Earlier in the day, Israeli jets launched a fresh round of airstrikes on the blockaded sliver, killing at least three other Palestinians, including a 14-month-old toddler, whose seriously wounded pregnant mother also lost her life hours later, the official Palestinian news agency Wafa reported.

On Thursday, Israeli warplanes conducted airstrikes against a number of purported positions of the Hamas resistance movement in the northern part of the coastal strip in response to the alleged launch of incendiary balloons from the besieged enclave.

In response to the air raids, two rockets were reportedly fired from Gaza towards the southern parts of the Israeli-occupied territories, triggering several rounds of red alert sirens in at least two settlements there. The projectiles fell in an open area, and no injuries were reported, Israeli media reported.

On Friday, Israeli fighter jets for a second time targeted some purported positions of Hamas in Gaza. The attack reportedly killed two members of Hamas' military wing, known as the Ezzedine al-Qassam Brigades.

On Saturday morning, around 90 retaliatory rockets were fired from Gaza into the occupied territories. The rocket fire activated warning sirens in multiple Israeli communities.

According to Wafa, at least seven people have been killed by Israeli forces, in both air raids and border shooting, and nearly 70 others sustained injuries, including three minors.

According to Press TV, Israeli officials blamed the Palestinians for the escalation, a claim that Palestinian officials strongly deny.

The Friday protest comes as Palestinians in Gaza have been holding weekly rallies to demand the right to return for those driven out of their homeland by Israeli aggression and an end to the siege on the enclave since March last year.

More than 270 Palestinians have been killed since then, and over 16,000 have been injured.