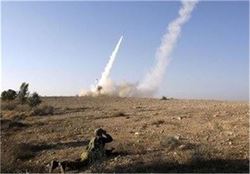 Two Israelis were killed in rocket attacks on Sunday following a spate of violence that began on Friday, after the Tel Aviv regime killed two Palestinians in airstrikes as well as two others killed in military raid on the weekly “Great March of Return” rallies in the besieged Gaza Strip.

RNA - Two Israelis were critically injured and later died on Sunday from their wounds after a rocket struck a factory in the Southern city of Ashkelon, South of Tel Aviv.

Another man in Ashkelon is reported to be in critical conditions after his car was directly hit by a rocket.

A 58-year-old Israeli man was killed in the Israeli city of Ashkelon hours earlier, after being struck by shrapnel from a rocket strike.

Netanyahu also stressed that he held Hamas responsible, not just for its actions, “but also for the actions of Islamic Jihad”.

Since Friday, Israeli attacks have claimed the lives of a total of eleven Palestinians, including Saba Mahmoud Abu Arar, a 14-month-old baby girl, and her 8-month pregnant mother.