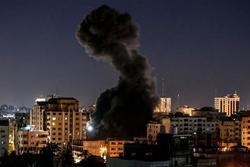 Palestine announced that a ceasefire agreement has been reached with Israel, after 25 people were killed in three days of Israeli attacks on the besieged Gaza enclave, which were responded to with homemade rockets from Palestinian groups.

Earlier, Gaza's Health Ministry reported that at least 25 people have been killed and 154 others injured in the fresh flare-up of violence in the enclave. Two pregnant women and a 14-month-old baby were among the fatalities.

Israeli Prime Minister Benjamin Netanyahu stated on Sunday that he had ordered the army to “continue the massive attacks” against targets in Gaza and boost “ground, armored, and artillery forces” around there. He also stressed that he held Hamas responsible, not just for its actions, “but also for the actions of Islamic Jihad”.

Tensions erupted on Friday following the killing of four Palestinians, two in an Israeli air raid on Southern Gaza and two during the regime’s live fire at anti-occupation protesters near a fence separating the blockaded coastal enclave from the occupied territories.