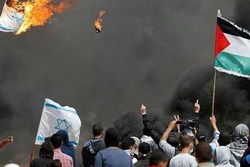 The Israeli occupation forces on Friday killed a Palestinian citizen and injured 30 others in the Great March of Return in the Gaza Strip.

RNA - The Ministry of Health said that Abdullah Abdulal, 24, was killed in the demonstrations, while 30 Palestinians, including four children and a medic, suffered bullet wounds, Palinfo reported.

Hundreds of Palestinians marched along the border between the Gaza Strip and the 1948 occupied Palestinian territories on the 58th Friday of the Great March of Return.

Since the start of the border protests, the Israeli occupation army has killed 313 Palestinians and injured over 31,000 in the Gaza Strip.