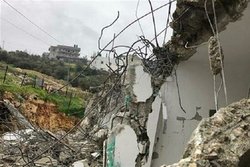 RNA - The UN Office for the Coordination of Humanitarian Affairs (OCHA) said in its biweekly Protection of Civilians Report that most of the demolitions had taken place under the pretext that construction had taken place without a “permit,” Palestinian Ma’an news agency reported on Sunday.

Of the demolitions, 37 were in East Jerusalem and four in the so-called Area C of the West Bank, the report said, adding that the destruction directly displaced 38 homeowners and affected 121 others.

On April 25, the Israelis demolished a home in Az-Zawiya Village in the West Bank, displacing a family of seven, including five children, the report said.

During the full month of April, a total of 70 structures were demolished in the occupied Palestinian territories by Israeli forces, according to OCHA, displacing at least 70 people — including 33 children — and affecting a further 313 people.

In January, OCHA said Israel’s demolition and confiscation of Palestinian-owned structures in the West Bank had soared by 10 percent in 2018.

International bodies and rights groups say Israeli demolitions of Palestinian structures in the occupied West Bank and East Jerusalem al-Quds are an attempt to uproot Palestinians from their native territory and confiscate more land for the expansion of illegal settlements.

Area C, which is under full Israeli control, makes up more than 60 percent of the entire occupied West Bank. Israeli authorities frequently demolish Palestinian buildings and structures in the area, with Bedouin and herding communities being particularly vulnerable to that practice.

Israel has been occupying the West Bank, including East al-Quds, since 1967. Ever since, it has been building settlements throughout the land, in a move condemned by the UN and considered illegal under international law.