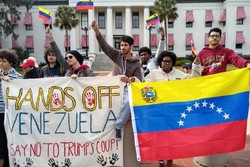 The future of Venezuela can only be decided by its people, Vladimir Putin reminded Donald Trump in a phone call, as the US pushes hard for regime change in the Latin American country.

RNA - The Russian and US Presidents talked on the phone on Friday. Among other issues, they discussed Venezuela, where a military coup attempt was averted earlier this week, RT reported.

Foreign meddling and attempts at forceful regime change in Venezuela only undermine any prospects of resolving the crisis through political means, Putin stressed.

“Only Venezuelans themselves have the right to determine the future of their country,” he told Trump, according to the Kremlin website.

There were clashes in Caracas on Tuesday and Wednesday as self-proclaimed interim president Juan Guaido announced the so-called “Operation Liberty”. But the coup attempt swiftly fizzled, after failing to garner enough support from the public and from within the military, which largely remained loyal to elected President Nicolas Maduro.

Since the beginning of the crisis in January, Washington has outright backed Guaido’s claim to power as it’s itching to see the socialist government in oil-rich Venezuela ousted.

Days of Foreign Intervention in Latin America Is Over