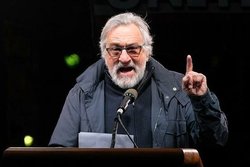 Famed Hollywood actor Robert De Niro, one of the most relentless and vocal critics of Donald Trump, has once against launched a broadside against the incumbent US president, wishing that he could be expunged from the world memory.

RNA - The American Oscar-winning actor, speaking at the world premiere of the new film “Yesterday,” envisaged a world in which no one had ever known or heard of Trump.

“We had an idea for a movie where the world wakes up and no one has heard of Trump. That would make everyone really happy,” De Niro said on Saturday.

Then, the veteran actor jokingly addressed the film’s makers – Danny Boyle and Richard Curtis – saying, “Danny, Richard, let’s talk,” and both came out from backstage to a big laugh, according to New York's Daily News reports.

This is not the first time that De Niro has strongly chastised the US president.

During a brief CNN appearance, the actor engaged in a tirade against Trump and said his time as the US president will become “one of those things” people will look back on and recall with the words “Remember all that stuff, how terrible it was?”

De Niro recently denounced Trump as a “dumbbell," and claimed that he "has proven himself to be a total loser.”

Earlier in January, the American actor compared Trump to Adolf Hitler, claiming that like the incumbent US president, people thought dictators in the past "looked funny" when they first came to power.

De Niro has also called Trump a “blatant racist”, “a wannabe gangster in the White House," and a "national disaster." The Hollywood star once claimed he would like to “punch” Trump in the face.

Trump, however, did not allow De Niro’s swipes to go unnoticed and hit back on Twitter, saying that his true belief is that the famed actor may be “punch-drunk”.

...realize the economy is the best it’s ever been with employment being at an all time high, and many companies pouring back into our country. Wake up Punchy!
— Donald J. Trump (@realDonaldTrump) June 13, 2018

A new survey, released on Monday, showed that the majority of Americans continue to disapprove of the job Trump is doing in office and most say they will not vote for him for reelection in 2020.

The ABC News–Washington Post poll found that Trump’s disapproval rating among US adults is at 54 percent, and only 39 percent approve of his work since entering the White House.

The poll also found that Americans, by a 17-point margin, say Trump’s handling of health care makes them more likely to oppose than support him for a second term.