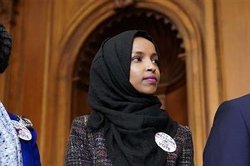 RNA - The controversial lawmaker, who has come under fire in the past for criticizing American foreign policy with regards to Israel and Saudi Arabia, said Wednesday that the US intelligence community was making up excuses to justify hostile anti-Iran policies just as it did before the invasion of Iraq in 2003.

“The same people who falsified intelligence before the Iraq War are now beating the drums for war with Iran. All of us have a responsibility to view their claims with skepticism,” she wrote.

The same people who falsified intelligence before the Iraq War are now beating the drums for war with Iran.
All of us have a responsibility to view their claims with skepticism. https://t.co/HD9v6kFcRE

The tweet came in response to a DailyBeast article, which cited US officials as saying that anti-Iran elements within the administration of President Donald Trump were inflating intelligence on Iran to pave the way for more aggressive policies towards Tehran.

According to the report, the recent decision by Washington to send a carrier strike group and a bomber task force to the Persian Gulf in response to “troubling and escalatory” warnings from Iran was a direct result of this policy.

National Security Adviser John Bolton, a hawk best known for his penchant for conflict with Iran, announced the decision last Sunday, reportedly based on false evidence that Iran was preparing to attack US forces in Iraq and Yemen.

“It’s not that the administration is mischaracterizing the intelligence, so much as overreacting to it,” said one US government official briefed on it.

Another US official said some administration officials were trying “to tilt the field in preparation for a possible coming conflict,”

“The risk is a low-level proxy unit miscalculating and escalating things. We’re sending a message with this reaction to the intelligence, even though the threat might not be as imminent as portrayed.”

The United States, under Trump, has set out on an aggressive campaign to curb Iran’s pressure in the Middle East region.

To reach that goal, the White House has been trying to zero out Tehran’s oil exports and cripple the country’s economy using sanctions.

However, the hostility doesn’t stop there as some officials have openly threatened to starve Iranian people.

In an interview with BBC Persian, US Secretary of State Mike Pompeo said last November that Iranian officials must listen to Washington "if they want their people to eat."

Iranian Foreign Minister Mohammad Javad Zarif said in response to Pompeo that “Iran will not just survive but advance w/out sacrificing its sovereignty.”

Tehran has dismissed Washington’s threats and has pledged to continue pushing back against the Trump administration’s hostile policies.