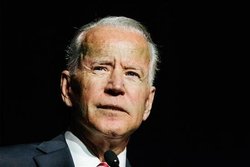 Democratic US presidential candidate and former vice president Joe Biden is the great white hope of the fake "resistance" to Bernie Sanders, according to Daniel Patrick Welch, an American writer and political analyst.

RNA - Welch, a political commentator based in Boston, Massachusetts, made these remarks in an online interview with Press TV on Thursday when asked if it is evident that Biden will win the 2020 US election.

“I don’t think it is at all clear that Biden can win. He can only get the nomination by massive interference and manipulation of the process. And it will leave people so pissed off that voter turnout will be severely depressed. In that scenario, Trump might win a second term, since his base is completely solid,” he said.

“The Democratic National Committee (DNC), their media and their money are pushing Biden nonstop. But it is not about beating Trump -- it's about beating Bernie Sanders,” he added.

Why are they so desperate to stop Sanders?

Because the US oligarchy is so determined to keep looting the country and the planet that they see even the slightest threat (like Sanders, Elizabeth Warren, Mike Gravel etc) as something that must be crushed. Biden is a pig -- serial liar, cheater, racist, apologist for empire. He is a complete cipher. The money candidate pure and simple. The Hillary Clinton of this election cycle.

The corporate interests within the Democrat Party have a clear strategy.

And what is that?

The goal is to flood the field with a ton of candidates so that Bernie or any other progressive can't get a majority. Then they will impose their own candidate as a “compromise.” Biden is only running because none of their earlier trial balloons took off. Kamala Harris didn't excite, Cory Booker didn't, nor Buttcrack or whatever his name is.... Beto O'Rourke, the whole lot of them.

Now they are just saying f*** it -- we will just run with literally the same names and faces... put the money and the machine behind them and shove it down people’s throats. They have NO intention of solving their political problem by coming up with any program that will address the actual needs of the people. ZERO. Trump is actually less of a threat to them than even the most progressive-lite of alternatives posed from within the democrat "left."

What kind of democracy is this?

It is no kind of democracy. It is an oligarchy. Most people with a brain and some common sense can see this if they dare to look closely. Jimmy Carter, hardly a communist, admitted openly that the US is not a functioning democracy. The Princeton study concluded that the system is an oligarchy where voters have virtually no power over the policies that shape their lives. It's a grand illusion to make them think they live in a democracy.

Biden is being spun into this caricature of the Anti Trump, which is completely false. No one was dying for Biden to run, and his candidacy is completely superfluous. The momentum behind the progressives is palpable, mostly under the banner of Sanders' candidacy. The powers that be simply cannot let this happen.

So this is how the Empire works!

They are working overtime already to discredit and marginalize Sanders. And I'm not even a Bernie fan. His foreign policy stances are terrible, and I think in this sense he represents the worst instincts of the imperialist left.

But the trouble for them is that in a big way the people have already decided. For what it's worth, the popular impulse has galvanized itself behind Sanders. And it's not even particularly Sanders the candidate -- although the core base has a bit of an unearned rap for being cultish. The truth is that it is this frustration, the insistence that the Powers that Be are going to listen this time, dammit. I don't think they can stop him without making it really obvious -- and that will be a disaster.

Is there anyone better than Sanders in the Democratic fold?

Gravel is Sanders with a decent anti imperialist line, but he is already being marginalized.

Both his and Sanders' supporters are almost fanatical though. The excitement and momentum is clearly on this side of the spectrum.

So something unusual can happen during the 2020 election?

In a recent poll of a Democrat action group, the progressive candidates together accounted for 65% of the total. These are the activists who will provide the boots on the ground for the campaigns.

Watch the coverage of Biden closely. It is absolutely crucial that they maintain the fiction of him being the "frontrunner" in meaningless and rigged polls. Just like in 2016. Their chosen candidate is very fragile, and their only strength is in the perceived inevitability of their nomination. You are seeing countless fluff pieces lauding Biden, pretending Trump is 'scared to death' of Biden (counter to fact), that only Biden can beat Trump etc etc etc. It's f***ing choreography, not an election.

And Trump it seems does understand all this, right?

Well he understands how to manipulate and inflame his own base, like any narcissist or demagogue. To supplant the real anger with a kind of racist and nativist impulse.

But people really are struggling. With living costs--i.e. housing, insurance, stagnant wages, working several jobs etc. And the people in power are lying to them, for decades, telling them everything is fine.

There is real and deep pain that is palpable among the people.

How this 'real and deep pain' will manifest itself?

Well the truth is that any marginally left candidate with even a nominally populist platform: free health care, education, higher wages etc. would sweep an election in this country. But that runs counter to the election industry's well paid punditry, and the media's constant brainwashing. That is why it will be beaten back at any cost. It is supposed to be a circus--a big, blood-and-money soaked circus. Not a true debate over ideas and policy.

The fact is it's not really about left and right at all -- it's a mirage. The real struggle is between top and bottom.  Nancy Pelosi, Trump, Biden, the whole lot of them. All represent the interests of the 10%.

Called by various names -- the ruling class, the bourgeoisie, the oligarchy... or in this case, the folks above the 90th %ile making $200,000 per year or so. The whole show is for them.

Sanders pays at least some lip service to the bottom 85%, though his program is hardly radical.

The rallying cry is consistent all over the world in rejecting the neoliberal order. From the Gilet Jaunes to the rejection of establishment candidates everywhere. It's messy, has many contradictions, and has no real core of theory or leadership. But people are waking up to the reality that they have been had for 50 years of this same shit.

The quasi religious worship of the market to solve all problems has only deepened them and continued to funnel wealth upward. People feel it in their gut-- they "know" it in the way Marx said (Wissend geht durch den Magen) but the people at the top keep gaslighting them and telling them they don't know their own experience. A reckoning is coming, and maybe sooner than many think.