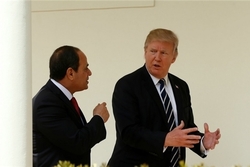 The Donald Trump administration is working to designate the Muslim Brotherhood a foreign terrorist organisation, the White House announced on Tuesday, which would bring sanctions against Egypt's oldest Islamist movement.

RNA - "The president has consulted with his national security team and leaders in the region who share his concern, and this designation is working its way through the internal process," White House Press Secretary Sarah Sanders said in an email.

Egyptian President Abdel Fattah el-Sisi urged US President Donald Trump to take the step during an April visit to the White House, The New York Times reported on Tuesday, citing officials familiar with the matter.

After the meeting, Trump praised Sisi as a "great president", as a bipartisan group of US lawmakers raised concerns about Sisi's record on human rights.

The Muslim Brotherhood, or Ikhwan al-Muslimeen, is a revivalist Islamic movement, formed in Egypt in 1928.

One of the oldest and most influential Islamic movements in the world, the Brotherhood was declared a "terror group" by Egypt in 2013 after El-Sisi led a military coup against Mohammad Morsi, a Brotherhood member and the country's first democratically-elected president.

The Brotherhood came to power in Egypt's first modern free election in 2012, a year after long-serving President Hosni Mubarak was toppled in the popular uprising.

The coup set in motion a violent crackdown against the organisation, with thousands of the group's members arrested, and hundreds sentenced to death in what human rights groups have described as sham trials.

Two of Egypt's closest allies, Saudi Arabia and the United Arab Emirates, also blacklisted the group but several Western powers, including the United States, did not, for both legal and policy reasons.

However since Trump's election, the Sisi government has repeatedly urged the US to designate the group, and in March 2017, Cairo sent dozens of parliamentarians, former diplomats and international law experts to Washington to convince the US of a ban.

The NY Times reported that US Secretary of State, Mike Pompeo, and National security adviser, John Bolton, supported the idea. However, the Pentagon, career national security staff, government lawyers and diplomatic officials have voiced legal and policy objections, and have been scrambling to find a more limited step that would satisfy the White House.

In a recent statement, Sanders acknowledged that the administration was working on designating the Muslim Brotherhood as "terrorists".

"The president has consulted with his national security team and leaders in the region who share his concern, and this designation is working its way through the internal process," the daily quoted Sanders as saying.

The US State Department had previously advised against banning the movement because of its "loose-knit structure and far-flung political ties across the Middle East".

Several political parties in Turkey, Tunisia and Jordan consider themselves as part of the Muslim Brotherhood or have ties to it.

The newspaper added that it was also unclear what the consequences would be for Americans and American humanitarian organisations linked to the Brotherhood.

According to a 2004 article by The Washington Post, supporters of the Brotherhood "make up the US Islamic community's most organised force" by running hundreds of mosques and business ventures, promoting civic activities, and setting up American Islamic organisations to defend and promote Islam.

Human rights groups have also voiced concerns that el-Sisi might use it to justify an even harsher crackdown against his opponents.