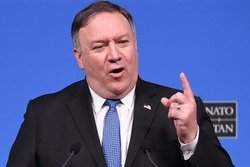 US Secretary of State Michael R. Pompeo has served as a hit man for the administration of President Donald Trump, says Professor Dennis Etler, an American political analyst who has a decades-long interest in international affairs.

RNA - Etler, a professor of Anthropology at Cabrillo College in Aptos, California, made the remarks in an interview with Press TV.

North Korea has suggested that it wants Pompeo disengaged from stalled negotiations between Pyongyang and Washington, blaming the top American diplomat for the derailment of bilateral talks.

“I am afraid that, if Pompeo engages in the talks again, the table will be lousy once again and the talks will become entangled,” Kwon said.

Professor Etler said that “Pompeo has the reputation of being a brazen advocate of US supremacy and hegemony. During his confirmation hearing before the US Senate he said, in reference to the contention between the US and Russia, that while the United States is unique and exceptional, Russia is unique but unexceptional. He said in so many words that whatever the US does in the world is fine and dandy because it's moral and exceptional, but whatever Russia does is deplorable and beyond the pale because it's amoral and not exceptional.”

“Examples of Pompeo’s hubris are legion. As CIA Director he told a BBC interviewer that the US spy service was the best in the world at stealing secrets, and then as US Secretary of State he lambastes China for stealing US intellectual property. He has alienated friend and foe alike by his outspoken disregard for diplomatic niceties. Like a bull in a China shop he has rampaged through Europe and attempted to pit European nations against Russia, China, Iran and each other,” he stated.

“Pompeo viciously attacks any nation that steps out of line to work with those counties the US deems as its rivals. He has criticized Hungary for establishing good relations with Russia, Italy for establishing ties to China’s Belt and Road Initiative, Panama for establishing diplomatic relations with the People’s Republic of China, and the list goes on and on. Most recently his ire has been directed at Venezuela, Nicaragua and Cuba in Latin America, he has threatened Turkey with sanctions for purchasing Russian S-400 anti-aircraft weaponry, he has constantly threatened China with intervention in the South China Sea. There is not one region in the world were Pompeo has not served as a hit man for the Trump administration,” he noted.

“His accusations against China’s and Russia’s support of the duly elected Venezuelan government are so over the top that Chinese diplomats have questioned his sanity. It is thus not surprising that the North Korea’s have suggested that Pompeo not be a party to any future negotiations. If the US sincerely wants peace on the Korean peninsula or anywhere else in the world they will have to change their tune and begin acting in a responsible manner. Don’t hold your breath,” the scholar concluded.

Saying No to Empire of Chaos