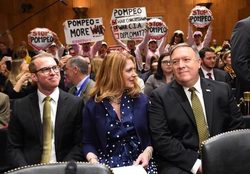 US Republican Senator Rand Paul has warned Secretary of State Mike Pompeo about going to war with Iran, reminding him that he has no “permission” to do so.

RNA - The Kentucky lawmaker suggested that the Trump administration might be preparing to take military action against Iran.

Asked if the administration was using a Congress’ 2001 authorization to start a war with Iran, the US top diplomat said: “I’d prefer to leave that to lawyers.”

The hawkish US politician also repeated Washington’s baseless claims that Tehran has ties with terrorists.

“There is a connection between the Islamic Republic of Iran and al-Qaeda. Period, full stop,” Pompeo claimed, referring to the terrorist group behind the September 11 attacks.

“You do not have our permission to go to war in Iran,” Paul shot back.

According to the 2001 law, the country has the authority to strike terrorists who attacked the United States on September 11.

Paul suggested that the recent decision by the administration to falsely designate Iran's Revolutionary Guards Corps a foreign terrorist organization is part of an attempt to prepare for war with Iran.

Iranian Foreign Minister Mohammad Javad Zarif has defended the Islamic Revolution Guards Corps (IRGC), saying the country will not allow “outlaw bullies” to undermine the sacrifices of the force.

In a post on Twitter on Wednesday, Zarif released a video of a 2016 presidential debate between Trump and his rival Hillary Clinton, during which he talked about Iran killing Daesh terrorists and said, “When @realdonaldtrump insisted that "Iran is killing ISIS", exactly who did he think was doing the fighting & making the sacrifice?”

Shortly after the US blacklisting of the IRGC, Iran's Supreme National Security Council (SNSC) slammed the US government as "supporter of terrorism," and designated American forces in West Asia, known as the United States Central Command (CENTCOM), as a "terrorist organization."