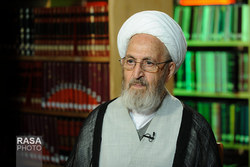 Ayatollah Sobhani called the economic blockade the lever has long been used by the enemies against Islam and said, “The US sanctions are conterminous with the seditions made by hypocrites of the early Islam.”

RNA - Ayatollah Sobhani, a source of emulation, in his Quran interpretation course, held in Hujjatia Seminary, elaborated on the verse no. 47 of Tawba Surah, and enumerating some seditions made by the hypocrites of the early Islam against the prophet (S), said, “The hypocrites have long stabbed in the back and betrayed the corps of Islam.”

Ayatollah Sobhani called the economic blockade the lever usually used by the enemies against Islam and said, “The US sanctions are conterminous with the seditions made by hypocrites of the early Islam. This lever has been used by the hypocrite and enemies since the early Islam.”

The prominent teacher of Qom seminary, explaining the attributes of the hypocrites, said, “Being upset over the success of the Muslims, and their happiness over the failure of the army of Islam is a characteristic of them. For instance, the media of the enemies are much happy when Iran is dealing with problems, yet the power of Iran upsets them.”

Ayatollah Sobhani finally said, “The Islamic nation shouldn’t believe what the media of the enemy broadcasts, they should search and believe the right news. The man should firmly believe in the Heavenly determined fate and destiny and rely on God in the face of problems and difficulties.”