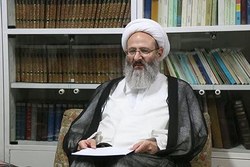 The member of Qom Seminary’s society of teachers, saying that the society won’t be corrected in the absence of expression of the facts, mentioned, “The number of robbing, corruption, embezzlements and economic corruptions will rise if the facts are not expressed vividly within the society.”

RNA - Ayatollah Faqihi, the member of Qom Seminary’s society of teachers, in his 8th Quran interpretation session of the month of Ramadan, held in Salmasi mosques of Qom, pointing to the hypocrisy spirit of the Israelites, said, “When the hypocrite are among the Muslims, they introduce themselves as the members of the Islamic society, yet they act as spies transferring the information of the Islamic society to the heads of the infidels.”

Marinating that the man should always abstain from the hypocrisy, he said, “The man may be somehow hypocrite without knowing it, however, a requirement of being the true believer is removing all such attributes.”

Ayatollah Faqigi said, “The man should always try to explore new facts. He shouldn’t remain silent over cruelties and oppression. When he understands the right, he should put it into practice and refrain from remaining silent over the cruelties such as robbing, correction, embezzlement and economic corruptions. In case of silence in such situations, the number of such corruptions will rise, and the society won’t be corrected.”