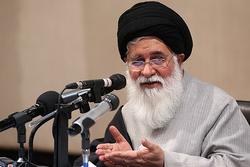 The representative of the supreme leader to Khorasan Razavi said, “The hypocrites have a sharp tongue attacking the Guardian of the Islamic Jurist, as they are the spies of the enemies among the Muslims.”

RANA - Ayatollah Sayyed Ahmad Alamolhoda, in a Quran interpretation session, interpreting Ahzab Surah, elaborating on the concept of the “sick heart”, introduced by the mentioned Surah, said, “The difference between a good heart and sick heart is that the former firmly believes and hopes in God, yet the later doubts in this regard.”

He continued, “Those with sick heart are some hypocrites and the spies of the enemy among the Muslims. They acted hypocritically in the battle of Ahzab, and in the present time, they are doing the same”.

Ayatollah Alamolhoda added, “What enemy needs is to create gaps and differences among the Muslims, and it achieves its aims using the said spies.”

Pointing to the verse no. 19 of Ahzab Sura, he finally said, “This verse mentions that those horrified by the war, when the threats of the war are eliminated, acting like creditors, call Islam and the prophet the causes of the war and sharply ask why don’t you negotiate with the enemy? Such people are still present in the society, they adopt the same positions toward the revolution, and we all should be careful against acting like them.”