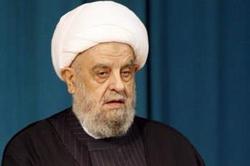 The chairman of the Lebanese Supreme Islamic Shia Council pointed out that the leaders of Arab and Muslim countries should stand by Iran, Palestine and Yemen.

RNA - Ayatollah Sheikh Qablan, the chairman of Lebanese Supreme Islamic Shia Council, issuing a message pointed out, “the nation of Lebanon, and Muslims should do their best creating proximity among views and resolving the differences, and it benefits the whole world of Islam and Arab countries.”

Saying that all the Muslim and Arab countries have a single enemy, he remarked, “The unity should be maintained against the common enemy, the Zionist Regime and its Takfiri allies.”

He continued, “We ask the leaders of Muslim and Arab countries to stand by the Palestinian people and Islamic Republic of Iran in the face of the pressures and cruel sanctions, as this country has helped other countries in the fight against the Takfiri terrorism.”

He finally maintained, “The heads of Muslim and Arab countries are supposed to help the Yemeni people, and prevent their slaughter and return security and stability to this friend country.”