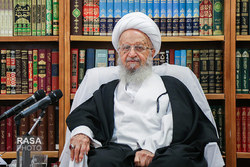 Ayatollah Makarim Shirazi, stressing that the issue of Hijab has gone beyond the religious concerns, said that enemies have targeted the system itself through Hijab.

RNA - Ayatollah Makarim Shirazi, presenting a speech in the ceremony of the Night of Decree (Laylat al-Qadr), held in Imam Musa Kazim (AS) Seminary, pointed to the problems of the country and said, “Our country is experiencing multiple maladies raised by foreign and domestic enemies, and economic and cultural problems.”

He said, “Both economic and cultural issues, including Hijab should be considered. The Issue of Hijab, due to its importance, is more than a religious issue, and it is a canal through which the Islamic system is being attacked by enemies, we hope that the officials consider this issue seriously and resolve the problems.”

Elaborating on the high position of the nights of the decree, he stated, “The truth hidden in this night is highly invaluable; according to God, the best deed to be performed at these nights is praying and supplication. And God has promised that the prayers made at these night will definitely be granted.”

“A requirement of the acceptance of the prayers is being free of sins. It is attained through repenting. Repentance purifies both the heart and soul of the man. If it happens, definitely the prayers will be granted”, he continued.

He mentioned, “The requirement of the acceptance of a repentance is the compensation of the past misdeeds through conduction of good deeds.”

Finally he asked people to pray that the economic and cultural problems, and those maladies created by the enemies, may be resolved.