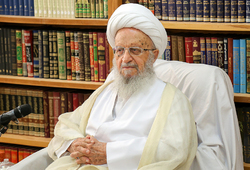 Ayatollah Makarem Shirazi invited all people to widely participate in Quds Day March and stressed the vigilance of the Muslims against the US plans.

RNA - Ayatollah Makarem Shirazi, in the ceremony of the second night of the decree, held in Imam Moosa Kazim (AS), stressed the mass participation in Quds Day March.

Ayatollah Makarem Shirazi said, “Israel was founded through mendacity and occupation of Muslims’ lands about 60 years ago. It is now endeavoring to occupy other Islamic states, such as Golan Heights. They also attempted to occupy Iraq and Syria using the ISIS.”

He added, “Imam Khomeini innovatively named the final Friday of Ramadan month as Quds Day and it has prevented from the erasure of the name Palestine and Quds from memories. We all are required to participate in the Quds March and keep the ideal of Palestine and Quds alive.”

Ayatollah Makarem Shirazi, dealing with prayers and how they can be best granted by Heaven, he said, “Prayers will be granted if the man abstains from wrongdoing, sins and acquisition of ill-gotten properties and money.”

He finally said, “The nights of the decree are a valuable opportunity for learning the religious issues.”