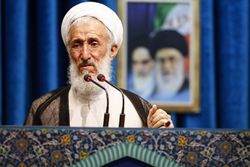 Tehran's provisional Friday Prayers leader Hojjatoleslam Kazzem Seddiqi blasted the idea of the Deal of the Century proposed by the US and Israel, saying that it is aimed at distracting the Muslims' attention from the core issue of Palestine and will not help resolve anything.

RNA - Addressing a large and fervent congregation of the people in Tehran on Friday, Hojjatoleslam Seddiqi said, "Deal of the Century will not be able to solve the Palestinian issue."

The senior cleric reiterated that the US-proposed plan is in complete denial of Palestinians' rights, stressing that any measure which is not to fulfill Palestinians’ legitimate demands will not retrieve their righteous rights.

He pointed to the International Quds Day, and said that Quds is a holy land for followers of all religions, including Muslims, Christians and Jews, who coexisted in the Palestinian territories decades ago and before the Zionist occupation.

This morning, millions of Iranians from all walks of life took to city streets all over the country to show their full and everlasting support for the oppressed Palestinian nation against Israeli occupation and aggressions, specially its recent massacre of the Palestinians in Gaza.

People in large groups of tens of thousands in Tehran and other cities across the country converged in main city squares on the International Quds Day to condemn Israeli occupation and its recent massacre of Palestinian demonstrators in the Great March of Return as well as those who were protesting against the US move to transfer its embassy from Tel Aviv to Jerusalem al-Quds.

On Thursday, the Iranian foreign ministry issued a statement, asking all Muslims across the world to unite against the US-sponsored “Deal of Century”.

The Iranian foreign ministry called on Islamic nations to form a united front against the plots hatched by the Israeli regime to sow discord among Muslims and divert attention from the Palestinian cause.

The ministry warned against a US-devised plan to be unveiled on the Israeli-Palestinian conflict and a related Washington-led conference in Bahrain in June, saying the plan, if implemented, will be an “eternal loss” for Palestine and a major gain for its occupiers.

"The current circumstances in Palestine and the region require Muslim nations and governments to maintain their unity, solidarity and integrity against the Zionist regime more than ever," the statement said.

"While exercising maximum vigilance against this common enemy, Muslim countries need to resist the conspiracies (hatched) by the regime and its supporters to create division in the ranks of the Muslim Ummah and make the issue of Palestine — the top priority in the Muslim world — slip into oblivion," the statement said.

According to Fars News Agancy, Iran believes that the establishment of lasting peace and stability in the region will not be fulfilled without the restoration of the rights of the innocent Palestinian nation, it said.

This will be achieved, the statement said, through the return of Palestinian refugees to their motherland and holding of a referendum with the participation of all the real residents of this territory.