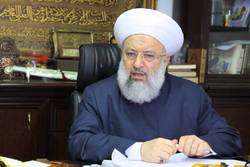 The chairman of the Lebanese International Union of the Resistance Scholars said, “Employing its own strategy, the Resistance Front has managed to frustrate the betrayal of the Arab states.”

RNA - The chairman of the International Unity of the Resistance Scholars, Sheikh Mahir Mahmood visited the Mufti (Islamic Jurist) of the Lebanese Shiites. Two parties talking on the latest developments of Lebanon, stressed the unity of the Muslim society against the plots of the enemy.

Delivering a speech in the Kafr Maleki village, located in Aakkar region, he pointed to the present era experience of the battle against the terrorist groups’ ideology and thought having distorted the Islamic fame, and said, “Despite all problems, we ought to rely on the Resistance and fight against the corruption.”

The head of the International Unity of the Resistance Scholars, pointing to the history of Palestine and its eras, stated, “Employing its own strategy, method and belief, the Resistance has managed to strike a crushing blow to the betrayal wall of the Arab states, and the world of Islam will soon see the fruits of the Resistance.”