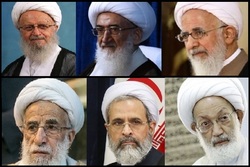 Along with different classes of people, the sources of emulation and scholars participated in the march of the Quds day and defended the rights of the Palestinian people.

RNA - Similar to popular masses, the sources of emulation and scholars participated in the march of Quds day in order to stand by the rights of the Palestinian people.

They also put forth some words on this grand march as the following:

Ayatollah Javadi Amoli: salute to the Iranian people who have answered the call of the ground founder of the revolution, Imam Khomeini. We are all required to defend the rights of the Palestinian people. The satanic plan of the deal of the century is going to complete the cruelties towards the Palestinian nation. The deal of the century is fraught with some major dangers, including the oppression of the wronged people and insults to the school and religion.

Ayatollah Nouri Hamedani: the people answered the call of Imam Khomeini through their broad participation. According to the stresses of Imam Khomeini and the supreme leader, Palestine is the first and foremost item on the schedule of the world of Islam. Today’s broad participation of the Muslims and liberals announced to the US, Israel and their mercenaries that their plan of deal of the century is doomed to failure.

Ayaotllah Janati: the day of Quds is a world day for the defence of the world oppressed people, and it is not bound to Iran, Iraq, Syria or some other few Muslim nations, it belongs to all oppressed nations in the world”.

Ayatollah Sheikh Isa Qasim: the march of the day of Quds is the effect of grandeur of Islam, Quran and Muslims. Participating in this march, Muslims demonstrated their abomination of the arrogant and the modern ignorance. It is a sign of the right stepping on the path of God, and certainly Muslims will capture the Heavenly victory.

Ayatollah Arafi: Trump and the Zionists’ plan of the deal of the century is aimed at the eradication of Palestine, but the Iranian nation and the Muslims from other countries are here to condemn their satanic plan. They are also here to prove they are feared by no sanction or threat.