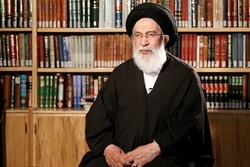 The top teacher of Khurasan Seminary said, “Scientifically, following Quran and prophet’s utterances, the words of Imam Ali are the most effective solutions for the believers.”

RNA - Ayatollah Sayyed Jaafar Sayyedan, the top seminary teacher, following the sessions on “the interpretation of Imam Ali’s Tawhidi expressions provided by Nahj al-Balagha”, saying that all the creatures are some signs demonstrating the Heaven, stated, “The grand Heavenly signs include the prophet (S), Imam Ali (AS) and Imams, as they have elucidated the facts related to the felicity of the man.”

The prominent seminary teacher pointed out, “scientifically, following Quran and the prophet’s utterances, the words of Imam Ali (AS) are the most effective keys to the life of the man, and he used to say ask me your question prior to my departure to the Other world.”

“According to the sermon no. 68 of Nahj al-Balagha, God is fully aware of both what is observed and hidden in our existence, He is rules over the whole world and men. Whatever exists in this mundane world is under the control of His grandeur”, he continued.

He finally maintained, “Although Imam Ali (AS) was the treasury of sciences and knowledge, during his own era, many few Muslims appreciated this fact.”