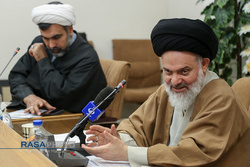 RNA —Speaking at an iftar (fast-breaking) ceremony attended by a number of personalties from the Islamic Seminaries and family members of the martyred members of the Defenders of the Holy Shrines, held in Allamah Tabatabai’s Dar al-Quran, Ayatollah Sayyed Hashem Hoseyni-Bushehri, the secretary of the Supreme Council of the Islamic Seminaries, commemorated the memory of Allameh Tabatabai and said, “He was the source of multiple blessings in the development of the religious culture and the divinely-revealed words.”

Stating that the performance of good deeds will provide man with a happy ending, he said, “Martyrdom is highly valuable and the best type of departure to the Hereafter.”

Ayatollah Hoseyni-Bushehri said, “Man should both live and die for the Ahl al-Bayt. In the course of the defence of the holy shrines, we observed that the warriors from Afghanistan, Pakistan, India and other countries entered the battlefield in a honourable manner with a single purpose.”

In conclusion, he said, “As the Supreme Leader of the Islamic Revolution also mentioned, we must honour the martyred members of the Defenders of the Holy Shrines, as they saved the Islamic world from the sedition of the Takfiris. Similarly, today, the youth of the world of Islam are standing against the evil ‘Deal of the Century’ and will frustrate the plans of the enemies.”