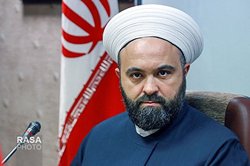 Sheikh Sohaib Habli, a member of the Lebanese Assembly of Muslim Scholars announced that the true Muslims are religiously required to stand by Quds and Palestine.

RNA - Sheikh Sohaib Habli, a member of the Lebanese Assembly of Muslim Scholars, delivering the sermons of this week Friday prayer held in Ibrahim Mosque of Sidon city, said, “As Imam Khomeini described, it is the day of Islam on which a sharp demarcation line is drawn between the right and the wrong.”

Pointing to Manama economic conference to be held on next days, he said, “that the Zionist Regime is using this conference to complete the deal of the century and pat an end to the issue of Palestine is so vile.”

“The issue of Palestine will remain on the board until there are some people putting up resistance and standing against Zionists. The Resistance Front will soon oust all the occupiers from Palestine and this plan of the US president and other similar plans won’t be accomplished”, the Sunni scholar maintained.