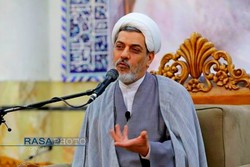 The teacher of Qom Seminary said, “Imam Khomeini rose against Taghut awaking the consciences and directed the revolution towards victory.”

The faculty member of Jamia al-Mustafa University finally maintained, “Imam Khomeini managed to rise and stand against the Taghut via awakening the people, and his movements finally achieved the victory.”