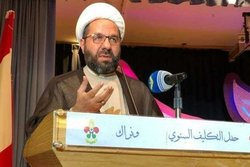 The vice chairman of the Lebanese Hezbollah’s executive council said that the deal of the century is a highly dangerous and ambitious plot of the enemies against Palestine.

RNA - Hujjat al-islam Sheikh Ali Daamoush, the vice chairman of the Lebanese Hezbollah’s Executive Council in the World Quds Day Seminar held in Hara of Sidon, said, “All the events and arrangements made in the recent years have been conducted in order to eradicate Palestine, yet their plans and plots have all ended in failure.”

Mentioning that the deal of the century is going to officially come into play after the month of Ramadan, he maintained, “The deal of the century is a highly ambitious and dangerous plan faced by Palestine during its history, as it is openly aimed at the total ruin of Palestine, regional Resistance movements, and striking blows at the supporters of Palestine, specifically Iran.”

The vice chairman of the Lebanese Hezbollah’s Executive Council added, “The Arab League and Arab countries, headed by Saudi Arabia, expressly back the said deal, and Manama conference was the first step in this regard.”

He finally said, “Palestine is alive, Palestine and its people should be defended against the acts and plots of the enemies. We ought to stand against the deal of the century using whatever means possible.”