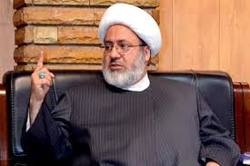 The deputy secretary general of al-Nujaba Movement said, “A feature of the Islamic rise is its returning the sacred Quds to its original owners, as it is the compass of Islam, Resistance and liberation.”

RNA - Hujjat al-islam Yousef Naseri, the deputy secretary general of al-Nujaba, interviewed by Rasa News Agency, expressed, “The noble Quds is the compass of Islam, Resistance and liberation. Thereby we believe that the continuation of the life of the occupying Zionist Regime will lead to the ruin of the reactionary Arab regimes standing against the proper work of the said compass.”

Then, he pointed to the economic conference of Manama, and reiterated, “A feature of the Islamic rise is the return of the noble Quds and Palestine to its original owners and the eradication of the Zionists. Thereby, all the Palestinian groups, including the Palestinian National Authority, known for its retreats against the pressures of the Zionists and Arabs, have spurned the anti-Palestinian conference, acting as the first phase of the Deal of the century.”

“The Deal of the Century leads to the total destruction of the Palestine and the expansion of the domain of the Zionist Regime, thereby all Muslims and Arabs should stands this deal”, he maintained.

Finally he said, “What have been done by Saudis and some Arab/Muslim countries against the world Quds Day is a defence of the Zionist Regime, aimed at hindering the liberationist movements.”