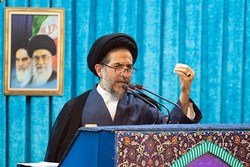 Tehran's provincial Friday Prayers Leader Hojat al-Islam Seyed Mohammad Hassan Aboutorabifard underlined the importance of the Supreme Leader of the Islamic Revolution Ayatollah Seyed Ali Khamenei's insistence that the government should do its best to meet the resistance economy objectives and enhance the role of the younger generation to this end.

RNA - Addressing a large and fervent congregation of the people in Tehran on Friday, Hojjatoleslam Aboutorabifard said, "Supreme Leader's advice on relying on the younger generation as a roadmap for development and achieving a stronger economy within the format of resistance economy should be taken into consideration."

The senior cleric underlined that if Ayatollah Khamenei's instructions are taken into consideration, the country's economic, social and cultural problems will be overcome soon.

"A strong economy will open up the gates to development and growth," he added.

In relevant remarks on March 21, Ayatollah Khamenei, in a video message broadcasted March 21 after the start of the new Persian year, said that economic issues still remain atop the country’s concerns, and called on the government and the nation to boost production in the country.

Ayatollah Khamenei, in his televised message to the nation on the occasion of the New Persian Year early this morning, offered congratulations to the Iranians on the occasion of Nowruz, and named the New Year of 1398 as the year of “Pick-up in Production”.

The leader hailed the nation's "fortitude and prudence" against enemies’ conspiracies.

He lauded the Iranian nation for showing strong reaction to the severe and allegedly unprecedented sanctions imposed by the US and abided by the Europe.

The Leader underlined that the economic issue still remain the top priority of the country.