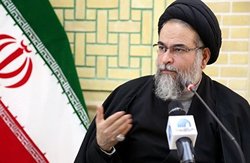 Hujjat al-Islam Madani said, “If the Islamic society was silent in the face of the tyrants, their ‎violations against the rights of the people and the breaking of laws and oppression would ‎spread.”‎

RNA – Hujjat al-Islam Sayyed Mahmoud Madani offered his condolences on the occasion of ‎the martyrdom anniversary of Imam Ja’far al-Sadiq and said, “The activities of Imam al-‎Sadiq, such as being the driving force behind the political movements against the tyrants of ‎his time, have often been overlooked.”‎

The rector of Qom’s al-Zahra University added, “Imam al-Sadiq didn’t have the conditions to ‎uprising and according to the conditions of that time if he had risen, the uprisings would not ‎have reached the desired final result like other uprisings. On the other hand, if the Islamic ‎society was silent in the face of the tyrants, their violations of the rights of the people and ‎the breaking of laws and oppression would spread.”‎

He stated that Imam al-Sadiq used a special method to promote religious knowledge and ‎said, “Due to the interests of the Islamic ummah, the Imam didn’t enter the field of jihad and ‎struggle directly, but he supported all the uprisings.”‎

Hujjat al-Islam Madani stated, “It’s narrated that Imam al-Sadiq declared that he will take ‎responsibility for the family and children of anyone killed in jihad against the oppression of ‎his era. He supported the Alid revolts and sometimes some of them paid little attention and ‎gave little love to Imam al-Sadiq.”‎

His Eminence stated that Imam al-Sadiq stood against the deviant currents from the pulpit ‎and said, “Imam al-Sadiq countered the doubts that threatened Islamic thought. A ‎movement called atheism had spread and was so daring that a friendly gathering of atheists ‎formed inside the Masjid al-Haram [Grand Mosque of Makkah] during the Hajj and the ‎government didn’t deal with them.”‎

He added, “Imam al-Sadiq’s debates and discussions with the atheists are detailed, which ‎shows that Imam was strong in his confrontations with the anti-religious, anti-God and anti-‎religion movements, and in my opinion, he was the driving force of the movement of Islamic ‎thought. Imam al-Sadiq was a refuge for the society of that time who benefited from the ‎love, kindness, kindness and care of Imam among Shi’ahs and non-Shi’ahs and even non-‎Muslims.”‎

Hujjat al-Islam Madani said, “It’s well-known that Imam al-Sadiq placed bread and food next ‎to a group of sleeping people who were sleeping under a canopy on a rainy night and said, ‎‎“Addressing the Imam, several companions said that these people don’t accept your ‎Imamate. Imam al-Sadiq said that if these people were from our wilayah (guardianship), we ‎would have a higher duty toward them.”‎