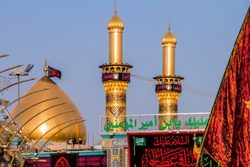 A group of Khadims of Holy Shrine of Hazrat al-Abbas traveled to Pakistan.

RNA - A groups of officials and Khadims (who serve in the holy shrines) of Holy Shrine of Hazrat al-Abbas traveled to Pakistan and met with hujjat al-Islam Seyed Riaz Hussein al-Najafi al-Naqavi who is the representative of ayatollah Sistani in Lahore and principal of the Imam al-Montazar seminary school in the city.

Hujjat al-Islam al-Naqavi said in the meeting, “Holy Shrine of Hazrat al-Abbas could convey the Islamic concepts properly to the audiences and hujjat al-Islam Seyed Ahmad al-Safi, the official custodian of the shrine, has proper management for the shrine.”

Officials of the Holy Shrine of Hazrat al-Abbas in the meeting said, “The aim of this travel is meeting and connecting with the followers of the Ahl al-Bait and those Shiites who have some hardships during traveling to the holy shrines in Iraq.”

The officials also visit the Minhaj al-Hussein seminary school and met with hujjat al-Islam Muhammad Hussein Akbar the principal of the school.

Imam al-Montazar seminary school, located in Lahore, Pakistan, has 5 branches in countries such as Iran, Iraq, Denmark, Sweden, US and Pakistan and hundreds of clergy students study religious teachings there.