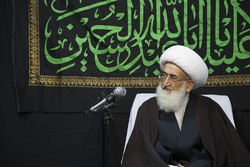 Hazrat Ayatollah Noori Hamedani, a source of emulation issued a message of condolence on the martyrdom of a Hujjat al-Islam Qasimi by the villain.

RNA - Hazrat Ayatollah Noori Hamedani, a source of emulation, issued a message of condolence on the martyrdom of Hujjat al-Islam Qasimi by the villain.

His message reads as:

I received the news on the martyrdom of Hujjat al-Islam Qasimi.

Martyrdom is an honour for the clerics that many scholars have attained it in the history.

We have pointed to the problems caused by the cyber space and warned against its control and localisation, nonetheless the officials have ignored it, like the issue of improving the economic status.

I remind the officials to solve the problems of the cyber space and not neglect it anymore.

And dear people should know that the scholars and clerics are standing by them and never let those who attempt to weak the position of the clerics to do and make a gap among the people and clerics.

The revolutionary people of Hamadan will widely attend in the funeral of this clergy martyr and bolster their ties with the system, revolution and clerics.

It should be mentioned that, on April 27, 2019, a 46 years old clergy was shot dead in front of Hamadan Seminary by a villain. The murderer, wounding two police officers, was shot dead on April 28.