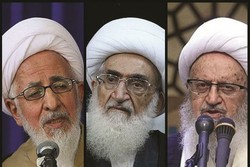 Alongside the Iranian nation, Iranian clerics and sources of emulation participated in the 40th anniversary of the Islamic Revolution.

RNA - Alongside the Iranian nation, Iranian clerics and sources of emulation participated in the 40th anniversary of the Islamic Revolution.

These Islamic figures defined the Islamic system as a unique blessing and emphasized on the importance of protecting the ideals of the Imam Khomeini -founder of the Islamic Republic of Iran and the leader of the 1979 Iranian Revolution - and Iranian martyrs.