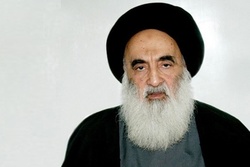 The chairman of the Iraqi Reform and Reconstruction Alliance said, the fatwa by Ayatollah Sistani on the collective combat rescued Iraq from the ISIS.

RNA - Hujjat al Islam Sayyed Ammar Hakim, the chairman of the Iraqi Reform and Reconstruction Alliance, sending a message on the anniversary of the issuance of grand Ayatollah Sistani’s fatwa on the combat against the ISIS group, said, “We proudly honour this anniversary, as this fatwa rescued Iraq from the ISIS group”.

Appreciating the courageous Iraqi people’s positive response to the call issued by the said grand source of emulation, he added, “the Popular Mobilization Forces formed as a result of Ayatollah Sistani’s fatwa on collective combat”.

It worth mentioning that, after the rise of the ISIS (Daesh,ISIL), the fall of Mosul and the advances of ISIS forces towards Baghdad and Karbala, Grand Ayatollah Sistani issued a fatwa on the combat and announced that those citizens capable of carrying and using weapons, are supposed to join the state security forces in defending their own land, people and holy sites”.

Who is Trump to declare the IRGC a terrorist organization?

The Society of Seminary Teachers of Qom’s response to US’ illegal action:‎