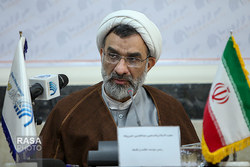 Hujjat al-Islam Khosropanah, in the national conference on the Theory of the Islamic Science and Its Application in the Education System, presented a report provided by the specific panel of the religion-based scientific theories.

The representatives of the panels’ board of directors in the closing part of the conference presented the reports of the held sessions, and Hujjat al-Islam Khosropanah, similarly, presenting a report of the specific commission on the “theories of the religious science”, said, “The first topic in the session was presented by me and the relation between Islam and sciences was discussed, and it was argued that the relations between four groups of texts belonging to natural, humanities, engineering and medicine fields can be explored and different methods of motivational influencing are dealt with in this regard.”

Hujjat al-Islam Khosropanah added, “Previously it was believed that experimental, engineering or medicine sciences could never be extracted from the jurisprudential texts such as the Quranic verses and narratives, nonetheless, currently it is found that the religion includes some motivational layers having the potentials to impact sciences.”

The aforesaid prominent philosopher stating that, as discussed by experts in the conference, the formation and development of sciences, especially humanities, in the West has made the adoption of such sciences inevitable to other countries, he added, “Knowledge of the amount and type of adopting the said sciences and their method of impacting will be a great help to policy-makers and planners of the countries in knowing such resources and giving proper response correcting and improving them.”

The Characteristics of the Social Jurisprudence