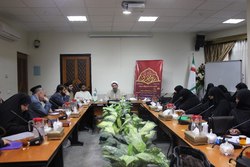 RNA - The seventh session of a series of sessions on Islamic Studies, titled “the Civilization-creating Dynamics of the Shiite Jurisprudence” was held jointly by Tooba Specific Centre and the Islamic Propagation Centre of Razavi Khorasan in the conference hall of Razavi Khorasan Islamic Propagation Centre, and attended by Hujjat al-Islam Ahmad Rahdar and some other seminary and academic researchers and figures.

Hujjat al-Islam Rahdar attended the first part of this session presenting the musts of such a civilization-creating jurisprudence and how it is/acts within the maximal standards. Below is the final part of the report of the aforesaid session:

The Guaranteeing Dynamics of the Civilization-creating Jurisprudence

The civilization-creating jurisprudence relies on the fact that how Ijtihad (divine law on matters of theology and law) and its ultimate level is defined, and these two definitions changes its sphere, and if it moves from the topic towards reasoning, the dynamics of such a jurisprudence will be guaranteeing, as it targets some concrete issues from its own origin and schedules for resolving such concrete issues, and accordingly it will be a different jurisprudence.

If scriptures don’t (implicitly) indicate to the structure of the system, Jurisprudence won’t be civilization-creating.

If scriptures don’t (implicitly) indicate to the structure of the system, [it means] they won’t point to the civilization; according to any definition of civilization, literally, the system governs/includes some subsystems, and each system is composed of some political, social, economic, cultural and security subsystems, and thus, civilization is what creates cohesion among the subsystems and components, and in the absence of such a cohesive force, the system will collapse.

Even it is true about/on the smaller units and scales; as an instance, consider a government within a ruling system, if its economic team is basically incompatible with its cultural team, how long is such a government expected to sustain? Indeed, such a government will soon collapse, and certainly this fact also applies to the phenomenon of civilization that is much broader than government.

The jurisprudential method has the potentials to develop a civilization-creating

From among many other potentials, the methodological potential of the jurisprudence should necessarily be mentioned, and here, I only discuss the esoteric interpretation capacity of the Shiite jurisprudence and how such a dynamics develops a civilization-creating force; the esoteric interpretation is a method employed by some fields in humanities, including mysticism (Irfan), science of discourse (Kalam) and jurisprudence, in order to fill the gap between the era in which the narrative is produced and the era of Ijtihad, to recognise some scriptures produced and forged in the Epoch of Appearance (of Imam Mahdi), to realise the (social) conditions of life belonging to the eras different from the Epoch of Appearance and adapt the rules and orders to the conditions of such periods.

Meanwhile, many existing conditions are different from those of the time of the prophet/Imams or when the narrative were produced; Ijtihad is a mechanism and process that can link the current status of our lives and the scriptures of the Era of Reappearance, in addition, the method employed by Ijtihad to fill the aforesaid gap is the esoteric interpretation, a procedure that revises and invalidates some narratives, and in this regard, it attempts to most closely link the content of the narratives and the present status of the life.

However; there are some concerns regarding the creation of the said link and revision, because if such a link is created desultorily, it is possible to blunder, as many have done so, and our understanding of scriptures isn’t in-depth, the surface of the texts are regarded as the substantive argument, nonetheless the esoteric interpretation never solely relies on superficial levels.

The difficulty in what Ijtihad dos is that, on the one hand, it has to regard the surface of the texts as authentic argument/s, as many of our societal interpretative productions are based on the authentic arguments of the surface of the scriptures, and on the other hand, if the jurisprudence only relies on superficial levels, as Hanbali, Salafi and Wahhabi models of jurisprudence have done, it will fail in the analyse and interpretation of the existing conditions of life.

According to the esoteric interpretation employed by Ijtihad, a serious concern is that, the jurisprudent is necessarily expected to act within the framework specifically set by the narratives, and at the same time, adapt the said framework to the present situation of life, and besides, it should provide an authentic standard for the current life to be measured against.

Generally, to do this, the jurisprudent has some options, in some cases, reading a narrative, he feels that it isn’t applicable to an external individual situation, and interpreted so, it can’t be generalizable; and using some evidence, he can attribute some characteristics to a specific narrative and then apply it to an existing condition; and it depends on the dexterity of the Mujtahid to find out what whether or not narratives are attributable to broader contexts and what should be regarded as non-relevant.

Usually, when adaptations and revisions are made to the narratives, the jurisprudent is required to rely on some bases, because in case he adds some interpretations about Sireh (the practical way of behaviour [ of the prophet]) and reason to the system of Ijtihad, the outputs of his work should remain compatible with Quran, and it is never a matter of taste or personal view.

A jurisprudent should be diligent about making the correct interpretation on narratives if he is to maintain his system of jurisprudence stable. If he doesn’t rely on the proper bases, he will produce controversial interpretations. Interpretations basically rely on the reason, and such a reason is itself based on custom and wisdom.

The jurisprudent, who expects to manipulate his time, is supposed to consider the bases composed of reasoning and the inductions of the custom. According to the majority of jurisprudents, custom is not a source of reference/s, nonetheless they assess their judgements against this base.

The Functions of the Esoteric Interpretation

The functions of the esoteric interpretations are based on three assumptions: 1. Religion has no rule contrary to the reason, 2. Imams (AS) didn’t fumble in the introduction of the religious rules, 3. Realising who is the audience of the scriptures acts as the standard in determining whether the scriptures are rational or irrational.

Religious scriptures were produced in a style that stand solely understandable to the rational, however, it is supposed that such texts can be interpreted only by the owner of expertise, and if the expert realises a text as irrational, it requires some esoteric interpretation.

Civilization is a collective structure composed of multiple components, nonetheless, division is not meant by the term collectivism, and literally it means order and cohesion. If any source of knowledge is to be civilization-creating, it is required to, at least to some extent, have the format and structure of the civilization. Here, I mean the jurisprudential legacy of Shia, due to its individual, political, societal and governmental dimensions, is compatible with the pluralism of the civilization, moreover it has some solutions for all the levels of the humanity.

Prepared and Edited by: Fatemeh Tarzafan