Only the Syrian people can decide their country’s fate

Rasa – In a meeting with a delegation from al-Manar, Ayatollah Nouri-Hamadani stressed upon Iran’s defense and lasting support for Hezbollah and the Syrian government and stressed that only the Syrian people have the right to decide their fate. 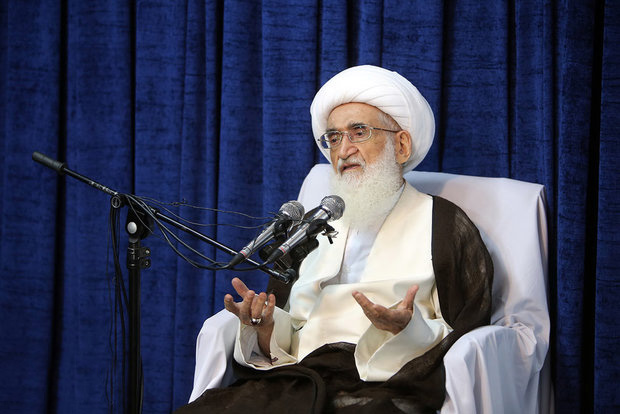 RNA – Grand Ayatollah Hoseyn Nouri-Hamadani met with members of the Board of Directors of Lebanon’s al-Manar television station and said that today, the path of Islam is clear and that due to the advancement of science and the righteous media, falsehood and disbelief is clear and the whole world has understood this.

The revered source of emulation referred to the words of the Imam Khomeini saying: “The United States is the antichrist of the current era and it is difficult for them to tolerate that another power has influence in the world because before the Islamic Revolution, they controlled the East and West and as a result of centuries of dominance and oppression, were able to dominate the Islamic world.”

He stated that the Islamic Revolution shook the limbs of the imperialists. The Western powers are similar to the enemies of Islam who imposed war on the Prophet Muhammad in the early Islamic era. “They did not accept Islam from the beginning and today, their hostility towards Islam and Muslims continues,” he said.

Ayatollah Nouri-Hamadani said the Holy Quran has instructed us resist and persevere and through this resistance, we can demonstrate [true] Islam to the world and expose the plots of the imperial powers and their agents, which include Saudi Arabia and Qatar.

His Eminence said that the Western powers broke up the Ottoman Empire and through this, they created the current countries of Kuwait, Bahrain Qatar Saudi Arabia and other countries and installed puppet regimes there.

Ayatollah Nouri-Hamadani said that Iran does not need nuclear weapons, and pointed out that there are many people eager to become martyrs in Iran.

Tags: Ayatollah Nouri-Hamadani Resistance Syria Al-Manar Imperialists
Short Link rasanews.ir/20015P
Share
0
Please type in your comments in English.
The comments that contain insults or libel to individuals, ethnicities, or contradictions with the laws of the country and religious teachings will not be disclosed