Rasa – The head of the Islamic Propagation Coordination Council of Ilam highlighted the telling role of Imam Khomeini (RA) in the movements present in the Islamic world. 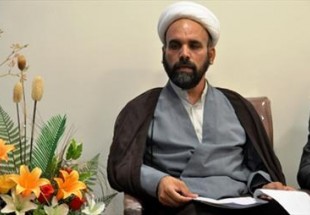 RNA – The head of the Islamic Propagation Coordination Council of Ilam, Hujjat al-Islam Ali Cheraghipour, highlighted the telling role of the late founder of Iran Islamic Revolution, Imam Khomeini in present Islamic moves naming his character one of a kind, spontaneous and unique which would always remain alive in history.

“The great personality of Imam Khomeini forced willful powers to bow down leading a great Islamic Revolution,” the cleric noted out, stressing that open-minded people hold him as a great leader with unique personality.

Elsewhere in his remarks, Hujjat al-Islam Ali Cheraghipour touched upon the duty shouldered by Iranian nation stressing, “It is upon the nation of Iran to offer a unique model of unity of solidarity to other nations.”

In doing so, according to the cleric, it would be incumbent upon each one of Iranians including authorities to follow the instructions offered by the late Imam Khomeini (RA).

Sayyed Ruhollah Mousavi-Khomeini, better known as Imam Khomeini, was born in the central Iranian city of Khomein on September 24, 1902 to a family of scholars.

He led Iran’s 1979 Islamic Revolution, which culminated in the overthrow of the US-backed monarchy of Mohammad-Reza Pahlavi, Iran’s last monarch. Imam Khomeini passed away on June 4, 1989 at the age of 87.

Tags: Iran Ali Cheraghipour Khomeini Ilam
Short Link rasanews.ir/200153
Share
0
Please type in your comments in English.
The comments that contain insults or libel to individuals, ethnicities, or contradictions with the laws of the country and religious teachings will not be disclosed