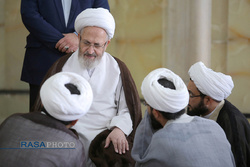 RNA - Ayatollah Jafar Sobhani, a source of emulation, in his Quran interpretation course, held in Hujjatia Seminary, elaborated on the verse no. 43 of the Tawba Surah and then said, “A group of people didn’t intend to participate in fighting in the battle of Tabuk, and thus asked the prophet to let them remain in Medina, the prophet allowed them to be there and they told other people that they were there due to the permission of the prophet.”

Ayatollah Sobhani added, “The prophet is innocent regarding whatever is Heavenly bestowed upon him, but he makes decisions on the worldly issues based on his own gumption and Ijtihad, and they could be either correct or incorrect, and the permission given to the mentioned people was an example in this regard.”

Ayatollah Sobhani continued, “The prophet is innocent, and his decisions should be understood correctly, the appointment to the position of messenger solely depends on innocence and trustworthiness.”

The prominent teacher of Qom Seminary, mentioning that the sedition-makers can cause damages in whatever area they enter, said, “Today, there are some people within the Islamic Revolution that distribute the seeds of despair in the society and make the youth and elites disappointed about the future; the internal sedition-makers can generate many more damages than the foreign enemies.”