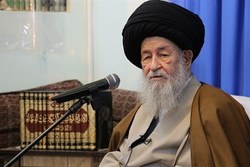 Ayatollah Alavi Gorgani emphasized on the importance of people mass participation in the election.

RNA - Ayatollah Alavi Gorgani cast his ballot in the 11th parliamentary and midterm Assembly of Experts elections and said, “In the elections, people should consider their duties from different aspects.”

“Based on Quranic verses, God the Almighty always protects whom are pious and serve people”, his eminence added.

“People should vote for those who serve the society and are virtuous.”, the prominent lecturer for the Advanced Seminary courses at Qom seminary concluded.