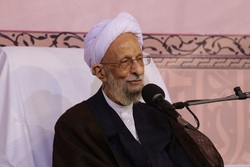 The chairman of Imam Khomeini institute warned against enemy’s heavy intellectual and ideological attacks and their impacts on the youth and then asked the related organizations to deal with the youth affairs more diligently.

RNA - Ayatollah Muhammad Taqi Mesbah Yazdi, the chairman of Imam Khomeini Institute of Culture and Research, in the course of ethics held in the supreme leader’s Qom office, said, “we live in a time much different from a half century ago, and some needs have been generated due to the occurred changes.”

He added, “The new situation have led to the generation of some new needs and doubts, they should be met properly and answered through a simple language. The material culture is prevailing everywhere nowadays, and it is not confined to the West, it has affected several countries across the world, the consequence of this culture should be vigilantly considered, otherwise it will ruin the material and spiritual lives of the men, especially the youth.”

He continued, “The Western culture induces that the religious thoughts are destructive, and the religion demolishes the society, sometimes the Muslim societies, in order to legitimise their faith, employ and rely on the foundations of the Western law.”

The chairman of Imam Khomeini Instituted expalined, “Today, the religion itself, as well as the belief of the future generation, is the target of the cultural attacks; nonetheless, our youth are ready to welcome and acquire the right, and if the education is performed correctly, compared to the past generations, they are more prepared for serving Islam and the revolution.”

Ayatollah Mesbah finally said, “We the members of the seminary are responsible against the heretical wave of attacks, we are in the front line and supposed to elucidate the facts and resolve the doubts.