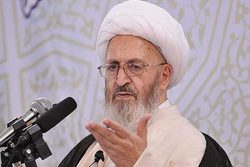 Ayatollah Sobhani, mentioning that the perfidy of the US is the continuation of the infidels’ acts in the Early Islam, said, “Mendacity, perfidy and betrayal are the key attributes of such infidels.”

RNA - Ayatollah Sobhani, a source of emulation, in his 19th Quran interpretation session, held in Hujjatia Seminary, interpreted the verse no. 74 of Tawba Surah, and saying that mendacity, perfidy and betrayal are the key attributes of infidels, maintained, “God, the Sublime, introduces perfidy and lack of commitment to the pledges as the chief characteristics of infidels.”

Saying that going back on promises is a key attribute of infidels, he stated, “Infidels don’t fulfil their pledges and go back on their promises under diverse pretexts.”

Ayatollah Sobhani, saying that the perfidies of the US is a continuation of the heretical acts of the infidels in the Early Islam, announced, “We observed that the US went back on its commitments in JCPA as the heads of this country are some infidels and non-humans.”

He finally stated, “Trustworthiness is a distinguishing attribute of the believers, and it has been much emphasized on by Imam, as this characteristic acts as the borderline between the true faith and heresy.”